June 1, 2013: Fishing Hole Lake
National Trails Day was celebrated on June 1st this year. Quoting a web source regarding the history of the event, “Since 1993, the first Saturday of every June is known as National Trails Day, inspiring the public and trail enthusiasts nationwide to seek out, discover, learn about, and celebrate America’s trail system…” The source continues, “…National Trails Day evolved from the 1987 report of President Ronald Reagan’s President’s Commission on Americans Outdoors. The report recommended that Americans should be able to walk out their front doors and within 15 minutes, be on trails that take them through their cities or towns and bring them back without retracing any steps. The recommendation, also known as Trails for All Americans, inevitably motivated several public and private parties to join the American Hiking Society in launching National Trails Day in 1993.”

REI, in association with GroundWork Dallas,

sponsored a local event celebrating National Trails Day focused on a small section of urban wilderness known as Fishing Hole Lake. Fishing Hole Lake is under development as a part of the Elm Fork Green Belt Park Project. The spring weather has been relatively cool this year and the sky was overcast for the 49 volunteers who arrived to participate. The cloudy skies made for good working conditions and, according to Peter Payton of GroundWork Dallas, 5 miles of trail were cleared and improved and 2,400 pounds of trash was collected and hauled away to the dump.

The Elm Fork is one of the four branches of the Trinity River (the other branches are the West Fork, the Clear Fork and the East Fork). Many of the lakes in North Texas are fed by the Trinity River, its branches and the various creeks that empty into it and are major sources of water for the Dallas/Fort Worth metro area. The Trinity runs right next to downtown Dallas and the city has proposed major urban renewal projects that involve the creation of parks and other public gathering spaces along the banks of a revitalized Trinity River. 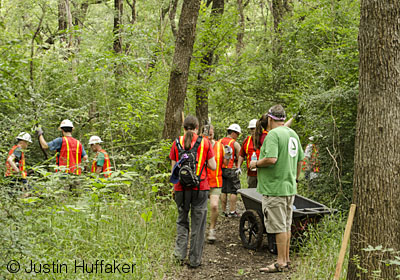 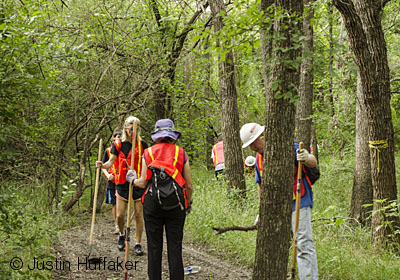